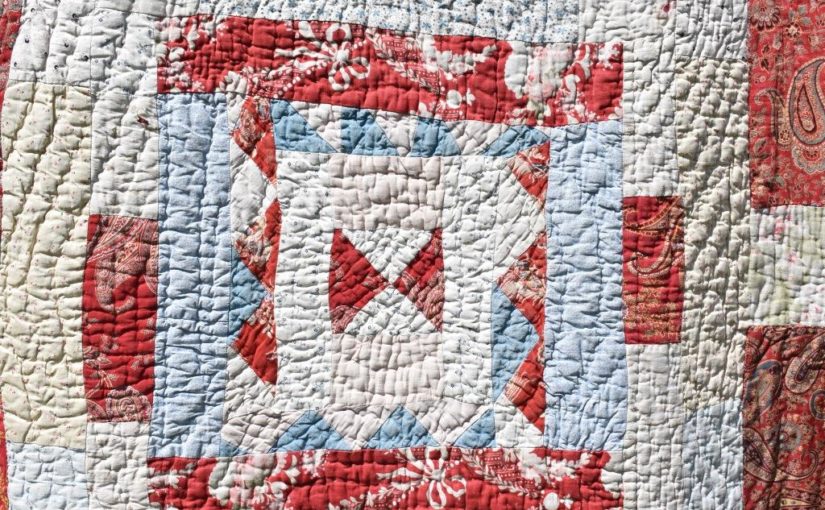 This quilt, which probably dates from the end of the nineteenth century, came (via an EBay dealer) from a farm sale near Penrith, a town on the edge of Cumbria in the north-west of England. It is a lively, cheerful piece, with an attractive overall selection of the colours, with a frequent use of red paisley fabrics, which unite the rest. It is machine pieced and hand quilted.

This frame layout, with a central section surrounded by successive borders, is a style that has been common in the UK since the eighteenth century.

On this quilt there is a small central hour-glass (a quarter-square triangle unit), surrounded by several borders; some pieced from triangles; others simply of joined fabric strips.

As can be seen here, the assembly of the patchwork has not been done with much skill; the shape and size of the triangles is inconsistent, and many of the triangle points in the first border have been chopped off when the next border was added. The triangle borders show no planning at the corners, indicating that the strips were pieced, and then cut to the length required – a common tactic. Before we criticise too much, we should remember that most girls had little or no geometry education at this time, particularly those from isolated rural areas.

Many of the outer frames simply consist of rectangles of fabric, joined to make strips, but there is one which is assembled from triangles. On close inspection the placement of the pieces in the other borders is not quite as haphazard as it first appears. The fabric pieces are symmetrically placed – for example there is a dark grey print fabric triangle on both sides, and just inside that, matching rectangles of a flowery cretonne of pink and white on a pale green background.

This Frame quilt which has parts which are noticeably older than others, as it has been considerably repaired in places. For example, the two red paisley rectangles above are obviously not the same fabric.

A close-up reveals that the right hand one is a repair:

There are several pieces of evidence for this; while the rest of the quilt is machine pieced (sewing machines became available from the 1870s onwards), small oversewing stitches can be seen around the edge of this fabric. The red paisley fabric on the right is brighter than the one on the left, with more colours. The left hand one has probably faded, but also, printing multiple colours became cheaper as the technology improved. However, the most compelling piece of evidence is the quilting. Note how the arching quilting lines from the paler patches continue across the left hand red paisley, but stop at the edge of the right hand paisley. The few quilted diagonal lines here bear little resemblance to the design around them – and in fact only go through the top layers of fabric, not through to the back (where the original quilting only is seen).

Once you start seeing this, the significant number of repairs becomes more obvious.

How many can you spot in this section?

I can see four. The most obvious is the plain red rectangle. But the paisley border above it was obviously added on top even later – they even machine quilted this. Did you also spot the red paisley triangle, and the narrow red paisley strip across the end of the rectangle near the bottom?

This is one of the pitfalls of buying online. Although there was some hint of “later machine stitching” from the vendor, the full extent of the additions only became obvious when it arrived. I enjoyed the detective work, and decided that I liked it, so kept it anyway.

This close-up shows most of the simple fabrics:

In places, the remains of other fabrics can be seen inside. When a quilt became too worn to use, it was quite common for it to be reused as the filling for a new quilt.

Frustratingly, the fabric within sometimes does not look like a patchwork design. Can you see the dark shadow created by the piece of woollen fabric showing through the worn patches? Maybe this was just extra layering.

When I first got this quilt, I didn’t think there was an overall design – it seemed to be a jumble of straight lines and circles. However, once I realised that some of the quilting on the front dated from later repairs, I studied the design from the back instead, where the original can be seen more clearly.

The quilting does have some structure, but it is quite organic! The large concentric circles appear at the centre, in the corners of the large central rectangle, in the middle of each side and at the outer corners.

These seem to be stitched freehand.

The quilter also included a concentric circle motif down the middle of one side of the inner rectangle, but not on the other.

Working in a frame, where the section previously stitched is rolled away out of sight, maybe she forgot what she had done.

Large echoing arched lines are used in between the circles, and around the edge of the quilt is a large border of lined diamonds.

Look at the picture above of the back of the whole quilt again – you will see that this diamond border is much wider on one side than the other side. By looking again at the front of the quilt, I think that this is because she miscounted the borders. The circles at the corners of the inner rectangle are over the long narrow red paisley border, the triangles and the wider red paisley inner strips on the left hand side, but are shifted further in on the right hand side.

Quilts like this may be lacking in technical excellence, but show a sturdy robustness and bold spirit in design.

Or go back to the Antique Quilts home page.

If you would like to mix a great variety of fabrics together in your own quilt, you might be interested to look at the Scrap Quilts page in the Techniques section.