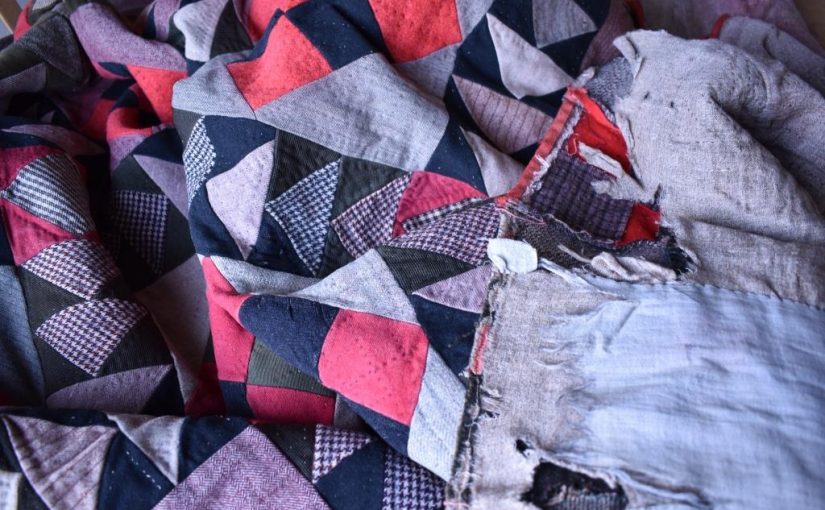 John opened his eyes slowly, noticing that he had almost five minutes before the alarm clock started ringing. After almost forty five years of getting up to do the morning milking, his body clock could have easily done without the mechanical supplement, but he left it set as part of his routine.

His ungainly body was pleasantly cosy, and his eyes rested for a minute upon the heavy, red woollen quilt which covered him, faithfully doing its job.

It had only been back on his bed for the last five years – his late wife’s tastes had been far more floral and synthetic, but when he had found it at the back of a cupboard one day, it had summoned up memories from way back, and he had decided to bring it back into use.

He first remembered seeing it as a small boy, on his grandparent’s bed in their Pembrokeshire farmhouse.

He had liked tracing the overlapping curves of the stitching lines along the edge, and then counting the big leaves. He always particularly liked the spiky sun in the middle.

Often, his Granny had it turned it over onto the terracotta side, and then he liked finding the corner with the small label, and trying to decipher the letters in the unfamiliar cursive script “Q. L. Jones”.

He wished now he had remembered more about who had actually done the quilting, and precisely where she had fitted into the family history.

His mother had brought the quilt out of Wales after her parents had died, and as a teenager he had used it to ward off the cold winter nights, as well as brightening up his room with its warm red glow. He briefly stroked its familiar scratchy surface now, and then pushed back his memories along with the covers, bracing himself against the chill as he quickly donned his clothes.

Later that afternoon, as he was settling down for a quick cup of tea, there was a knock on the front door. Although he was only four miles away from the nearest large village, the farm was rather isolated, and he had very few visitors, particularly from anyone unfamiliar with the location of the more frequently used back door.

“Mr Wilson?” “I’m glad that I have found you in. I don’t suppose you remember me – we haven’t met since my husband did your wife’s funeral. I’m Laura, from St Peter’s.”

As John ushered her into the kitchen, and found another cup, he couldn’t help noticing the dusty, sagging armchairs and the thick layer of grime on the cooker. Laura didn’t seem to notice though, and accepted the tea gladly.

The thing is, Charlie Wragg told me about your Jacob’s sheep.”

John’s face broke into a shy smile. His small flock of Jacobs was a hobby rather than a commercially important part of the farm, but he had won a number of prizes with them at the local agricultural show, and was very proud of them.

“I was hoping that we could borrow a couple of them for our outdoor Nativity play. Charlie usually brings his sheep, but he’s retired recently, and sold his flock.”

John knew about “Christmas Live” although he had never bothered to go and see it. Each year, church members acted out different parts of the Nativity story, travelling around the pub car parks. “Do you have anyone who knows how to handle sheep?” he asked doubtfully “I wouldn’t want them running around loose.”

“Well”, Laura said, with a twinkle in her eye “that’s why we would need you too. I think you would make a very good shepherd!”

As John showed her out a few minutes later, he was left wondering just what he had let himself in for.

A few weeks later, after loading the sheep into his small trailer, he went back into the farmhouse for a few minutes to get himself ready. The previous week, Laura had met him at the church hall and shown him where a selection of costumes made from old blankets and curtains were stored. Together they had picked out an outfit that was approximately his size. He was grateful that the head cloth didn’t look too much like the tea towels he remembered from primary school days. Donning the simple robe now over his clothes, he reflected that Yorkshire, particularly on this cold, night sparkling with frost, was probably a good deal colder than Bethlehem, and almost as an afterthought, picked up the small patchwork quilt that he often tucked round his legs on chilly evenings in front of the television.

He couldn’t remember where it had come from – it seemed to have always been knocking around a corner of the old farmhouse, and was showing evidence of its hard life.

Two sides had got so frayed that they had been trimmed off at some stage, and there had been a rather unsuccessful attempt to wash it, which had caused some of the red dye to run a bit.

Made of red, black, green and grey tweed pieces, it was perhaps a bit gaudy to be very authentic, but he could wear it around his shoulders with the plain lining side out.

It was in desperate need of more repairs really, but his sewing skills were not up to much, and he’d been putting it off. As he looked it over, he smiled – it was an old friend, and would keep him company on this unusual night out.

In the pub car park, he unloaded the sheep, having made sure that they each had a secure halter. These two were used to standing still for shows, but he’d done a bit of extra practice with them in preparation, as the conditions would be rather different this time.

Laura was also playing the part of a shepherd, so he gave her a try at looking after a sheep. She did better than he expected – “not much different to my large dog”, she laughed.

The crowds hadn’t arrived yet – they were at the first pub down the road, watching the Angel Gabriel bring some surprising news to Mary.

Then, out of the darkness, he heard them coming. My goodness, there were far more than he had expected – two, three hundred?

He stood nervously on one side of the clear area at the middle with the other shepherds, while the onlookers spread all round the outside. He could see the angels waiting up at the top – what a motley crew, he thought with a smile. All shapes and sizes. Angels in picture books don’t normally look quite so ordinary!

Then the narrator started, and the crowd was hushed.

The floodlights lit up, first the shepherds

and then the chief angel, who rolled down the slope in her wheelchair with her arms outstretched in blessing, as the timeless words rang out:

“Don’t be afraid! I bring you good news. Today, a child is born in Bethlehem, who will be your Saviour!”

A still moment of silence under the starlit sky, and then the other angels ran forward.

“Glory to God in the Highest!”

Without even remembering Laura’s instructions, John sank down on one knee, as he gazed at the uplifted faces before him. The half-forgotten words of the carol came back to him as they sang: It Came Upon the Midnight Clear.

And then the angels were gone, and as the floodlights were dimmed, John stumbled back to his feet, slightly bewildered, but holding on to a sense of peace in his heart.

Not sure for a moment what to do next, he heard Laura call out “If I take both sheep for a minute, could you help push Becky up the hill to the next pub?”

Turning a little, he saw the chief angel waiting for him, and seized the handles of the wheelchair. Becky told him where they needed to go to wait for the next part, around the corner next to the beer barrels.

As they stood quietly waiting for the final scene with the three Wise Men on horseback, he couldn’t help noticing that Becky was shivering.

“Here” John said “have this.” He pulled the patchwork quilt off his shoulders, and tucked it around her gently. “Is that better?”

John looked at both their costumes for a moment, and they both burst out laughing.

At the end, John insisted that Becky keep the quilt for her journey home.

“Are you coming to church on Christmas morning?” Becky asked “I could give it back to you then.”

A moment’s hesitation, and then John replied “Yes. Yes, I think I might just do that. I’ve heard the message of the angels tonight.”

With thanks to the members of Christ Church, Stannington, Sheffield,

and particularly to Cathy Wragg.

If you would like to see more photos of the two antique quilts shown, they can be seen by clicking on the links:

A free, downloadable booklet version of this story is available from the website shop.

If you enjoyed this, you can read another of my stories Christmas Crisis