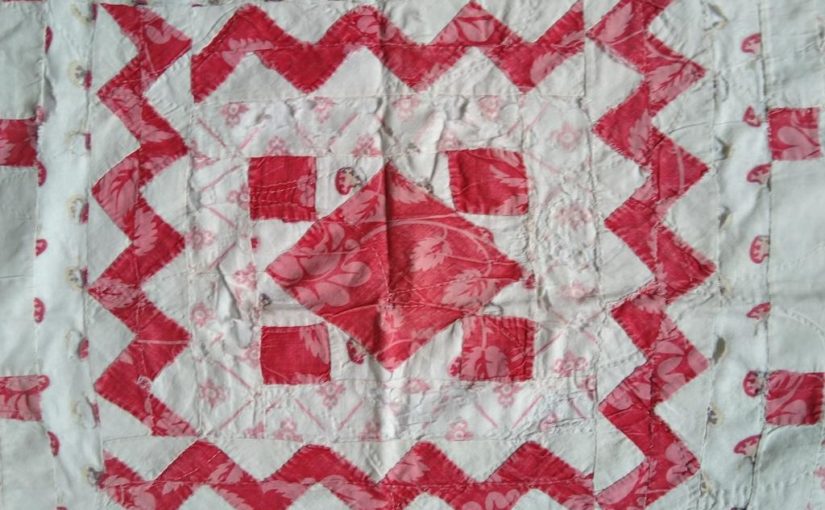 The layout and fabrics of this entirely hand-stitched quilt indicate that it probably dates from the first quarter of the nineteenth century, although it came with no provenance.

It has a frame layout, where a centre section is surrounded by borders, but (as is found for a number of quilts of this date, such as the Mariners Compass Coverlet in the Quilters’ Guild Collection, and a Patchwork Bedcover in the Museum of Wales Collection), the centre section is comparatively small, and is surrounded by a large field of patchwork before a single border. Remember that when the quilt is used on a bed, much of the border area will hang down the sides, making the central area more prominent.

This relatively small central section features a diamond with square corners, surrounded by a chevron border pieced from triangles. The order of application of these borders can be worked out by looking at their length; there is one short border, which must have been stitched onto the framed centre first; then two which each overlap the centre with the end of the previous border, and then a final longer one, which overlaps two corners.

After another narrow border, the centre section is surrounded by nine patch blocks arranged to form a pattern often known as Irish Chain, where diagonal lines of small squares cross the whole quilt.

This particular variation has centre squares which are larger than those at the corners. Although it is unknown whether the design was called by the name here at the time, it is often referred to now as “Puss in the Corner”, a name which derives from a children’s game in the 18th-19th centuries. One child stood in the centre with the other four in the corners. At a signal they all had to change places, trying to find a corner. The one who couldn’t capture a corner was “Puss” and took the centre.

The fabrics are worn in many places, and it has a number of repairs. I strongly suggest that it had four borders originally, and that the better parts of these have been used to create the remaining two borders. This can be seen as the direction of the border print changes on some sections, and the rather crude repairs can be seen from the back:

Strictly, this should be described as a coverlet, rather than a quilt, as it has no wadding. It is hand quilted with an overall design of clamshells.

This coverlet is somewhat unusual compared to many which survive from this period, being made from larger quantities of the same fabric, rather than a wide variety of different prints (e.g. see the Dorset Frame Coverlet). One possibility is that it was largely made from recycled dresses; if this was the case, then the coverlet construction dates from a time a little later than the fabrics.

This fabric appears in greatest prominence in the small centre section, but is also used for the corners of each nine-patch block.

True damask is formed by a specialist weaving technique which creates two different textures. This fabric however is clearly printed with a darker shade of red on a paler red background to leave a design of roses and leaves; both shades are undoubtedly madder, so in fact it would be an alum mordant that was printed in the areas which become the darker red background when dip-dyed.
A photo on page 63 of Printed Textiles by Linda Eaton, shows a sample of ruby printed furnishing damask published in Ackerman’s Repository 1810. Eaton reports that “in the early nineteenth century ….many faux damasks were being printed”. This is the only reference I can find to printed damask effects, but printers became quite skilled in making cheaper versions of other expensive textures such as ikat and watered silk.

This makes the first narrow border around the red damask print centre, and the larger squares in the middle of each “Puss-in-the-Corner” nine-patch.

This fabric is block printed; there are some indications that identify a hand-carved wooden block. Some of the prints are a little fuzzy where the block was perhaps becoming worn, and there are several places where the “horns” of the little motif are not symmetrical; e.g. see bottom right of the photo of the red damask centre above. This type of design with the broken lines would suit block printing, as there would be no direct continuation of the design required when lining up the repeat. It is possible that there was originally a second colour in addition to the pale pink obtained from madder with an alum mordant, as the fabric has worn away around every one of the small pink dots where the lines meet – certain mordants such as iron can attack the fabric over time.

This red, pink, black & buff “mushroom” print appears in small triangles around the red damask print diamond centre, and also in a narrow border which surrounds the centre section.

It also appears to be block printed with shades obtainable from madder using different mordants. I think that parallel areas of alum and iron mordants were printed, with occasional overlap between them to produce the third, browner shade. If this were then overprinted with more mordant to create deeper shades for the blobby outline, and then dyed in madder, that would give the design.

The photograph on the right shows a distinctive feature which has worn away in most places: small scattered dots known as picotage. These dots would have made from a block which had been pinned with small pieces of wire. Inserting these wires into the wooden printing blocks was a fiddly and time-consuming task, even on a relatively unsophisticated fabric such as this.

This photograph shows a larger area of the border fabric:

The angular, jagged shape of the flowers is an example of a “shawl print” style. These were printing designs which imitated the more expensive woven shawls.

The straight, dark lines are likely to have been printed using a coppered block, where strips of metal are inserted into the wood. The least faded scrap can be seen through a gap where the border has been remodelled, and again clearly shows picotage.

Unfortunately, the coverlet has no provenance, but all of the above point to a date in the first quarter of the nineteenth century.