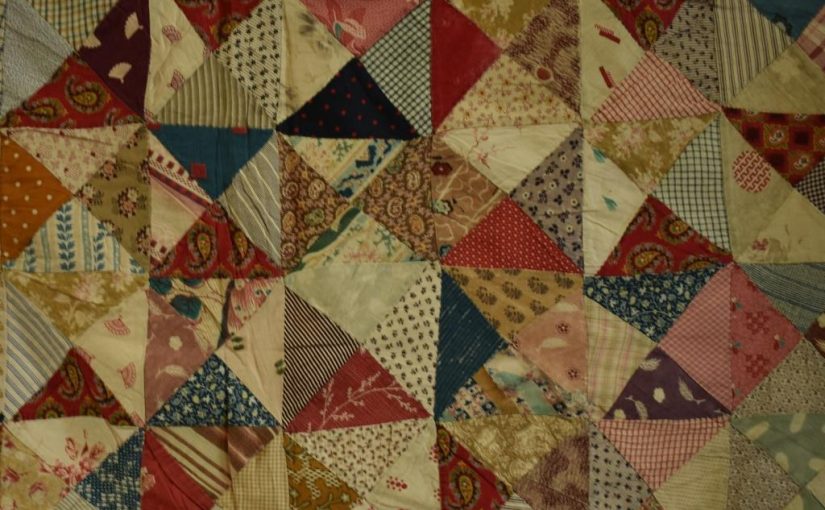 Mosaic patchwork may be made with a single shape, such as a diamond, square, equilateral triangle or hexagon. There are two possible ways of stitching these – see Techniques: hand piecing

This early nineteenth century example, made from red & black hand-woven wool and grey linen is very striking in its simplicity.

The backing is grey linsey-woolsey.

Quarter-square triangles in a wide variety of fabrics are found in this patchwork coverlet made by Harriet Yeatman, a Dorset glovemaker .

Harriet was born in 1867, and as this is a double-sized coverlet, I suspect that this was made for her “bottom drawer” in preparation for the first of her three marriages in 1889. Some of the fabrics may be a little earlier than this – it is likely that her mother collected scraps of fabric for many years, and that some of them were used in the coverlet.

Many designs however, use more than one shape to form a more complex design.

The fabrics include several which contain strong, distinctive orange and yellow colours (seen here on dark blue backgrounds), which were first obtained by dyes containing chromium salts in 1830-40s

As the back of the patchwork is easily seen in this unfinished piece, the assembly method using the stitching technique over papers can be studied. This method is often known as English paper piecing, but it is found in many other countries too, so many quilt historians now prefer the term mosaic piecing.

Earlier quilts used shapes which were simple to draw, but as educational standards improved, the trickier hexagons became very popular, and even today are often a first introduction to this style.

This coverlet was made by a relative of mine, Illona Jones in the 1970s.

Particularly towards the end of the nineteenth century, some British quilts are found which can be described as having a “block” layout. Simple blocks had been included as part of mosaic and frame quilts for many years, but repeated, more complex designs within squares were largely an American development.

This simple but effective “Rob Peter to Pay Paul” design, is found in British quilts as early as 1850, and uses curved piecing.

Many different layouts are possible – including this unusual chevron design.

Some quilts were definitely influenced by the block styles which had developed on the other side of the Atlantic.

Basket quilts seemed to be popular – this one comes from Cumbria, and has the typical British knife edge, rather than the usual American binding.

To see other styles of traditional British quilts, click on the links:

If you are interested in seeing more historic British quilts, then click here to go to the collection of the Quilters Guild of the British Isles

If you would like to know more about how hand-piecing is done, click to go to the Patchwork (hand stitched) page in the Techniques section.