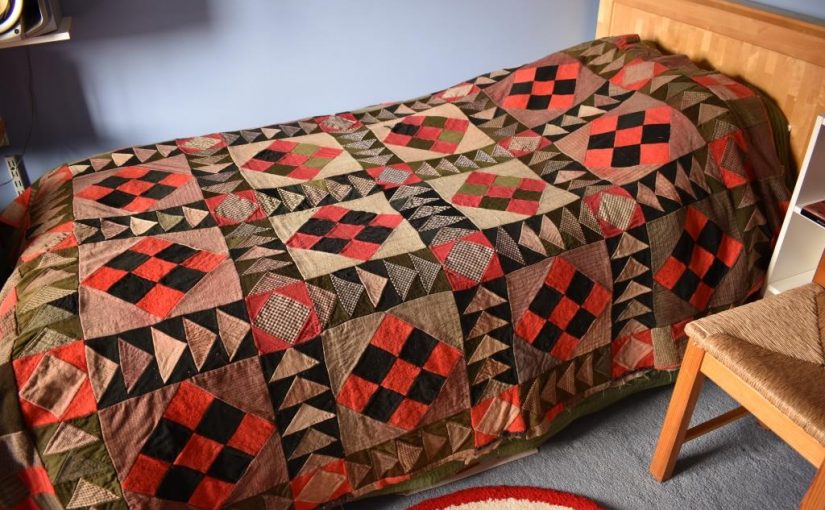 This cheerful coverlet probably dates from the early years of the twentieth century. It is machine-pieced from a variety of plain, tweed and small check fabrics.

Nine-patch blocks in red and black are arranged on-point within pale squares.

These are separated by pieced sashing made up of Flying Geese units in light fabrics against the darker background, arranged carefully to point towards the centre.

There are actually two different plain red fabrics – those in the outer blocks are of a bright, much thicker wool, almost like a blanket, but those in the inner section are of thinner fabric in a duller red. The photo above shows the transition between the two sections

The photo below shows part of the centre section, which includes some olive green squares in the nine-patch instead of the black.

It also has far more of the small check fabric, which doesn’t appear in the outer section at all.

The difference in fabrics between the central four blocks and the outer ring indicates that there could have been a break between making the centre, and finishing the rest.

The backing is of a rather thin linsey-woolsey, which has not been strong enough to cope with the pressure from lumpy seam junctions in the patchwork top, particularly in the absence of any wadding.

The weak backing has worn away completely in several places, particularly around the edge where it has been handled.

There are a number of clumsy attempts to repair this damage.

Along two opposite edges can be seen a border design made of plain large squares, and four-square units. A closer look reveals remnants of this pieced border that originally went along the two remaining sides as well, but that they have now been crudely trimmed off – maybe they had got too badly worn?

Despite the hard life that this quilt has had, I still enjoy it’s colourful nature, and the geometric design.

It features in a Christmas Story that I have written – you can read it by clicking the link: Fit for an Angel

The coverlet is quilted simply, mainly with black thread. The Flying Geese and main block corners are doubly outline quilted, while a square grid covers the nine-patches. The square-in-a-square cornerstones have a square with curved sides in the centre.

The coverlet has a block layout more commonly associated with American quilts, but which had started to influence UK quilts from the late nineteenth century. Is it American or British?

It was bought at a UK online auction, together with this tailor’s sample quilt which has the same red twill tape binding.

Unfortunately, as it came from an estate sale, there was little information available from the Essex vendor other than a possible New England connection. However, as there are known Welsh flannel patchworks in the collection of the Quilt Association which resemble this coverlet, it could easily have a Welsh origin.

If you would like to see other antique quilts from my collection, go to:

If you would like to see some of the quilts and wall hangings which I have made using block patchwork, look here: