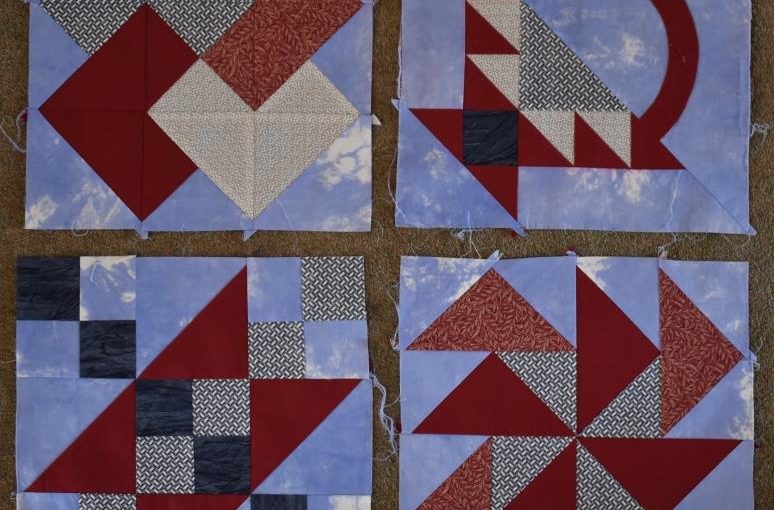 Which blocks work best together when making a Sampler Quilt?

Some people would say that you could choose any blocks, but I think that the finished result will be more pleasing if a bit more thought goes into it. (It doesn’t matter if you don’t agree with me by the way – you can put whatever you like in your own quilt – I’m just sharing what works for my rather nerdy brain!)

Many blocks look the same if you turn them round by ninety degrees. This can be described as having “rotational symmetry“. A lot of traditional blocks will have mirror image symmetry as well (like the Easter Morning block), while others will appear to swirl round (as Air Castle and Catherine Wheel do). But all of them have a “circular” feel to them, as seen in the three very different blocks here (all taken from patterns in my online Shop.

In contrast, some blocks have a distinctive diagonal feel to them, such as these:

If you turned these round through 90 degrees, the diagonal would go the other way.

These diagonal blocks can look rather strange on their own. They look much better when repeated in bulk, and particularly when turned so that the diagonal elements create a strong overall structure. For an example, see one of my patterns in the Shop (Northern Lights), which shows how the block on the right can combine in many different ways.

Maybe it doesn’t bother you, but I think that this directional quality makes them look rather odd if you just have one or two of these diagonal ones in among the “circular” type in a Sampler Quilt.

One day maybe I will try doing a whole quilt using different diagonal blocks – I think that I might quite like that!

The other type of block which definitely looks odd set into straight rows with “circular” blocks are those which are designed to be placed “on point”, such as the basket here:

It doesn’t look right this way up, does it?

Tree of Life, Grandmothers Fan, California Lily and Maple Leaf are others which would have the same problem.

So, generally, I would advise choosing blocks which all have a “circular feel” to them, and avoiding strong diagonals.

The usual layout for a Sampler quilt is to use sashing strips to separate and frame them. This is likely to look best if all your blocks show up equally well against the sashing. When you have finished all your blocks, it’s a good idea to spread them out on top of possible sashing fabrics to audition them (ask the shop owner nicely, and they should allow you to unfold a large section off the bolt of fabric, provided that the shop is not too busy). Take a photo, and then try another fabric. Its amazing how different they can look, as you can see on the three above!

So, why am I mentioning it now, before you have even started? It is because I would suggest making blocks which all have the same or similar fabric in the background, as that will make choosing a suitable sashing fabric much easier at the end.

A common choice is to have blocks with a light background with medium or dark sashing as shown here; but a more unusual look could be achieved using blocks with a dark background on a lighter sashing.

I’ve been provided with some samples of plain and semi-plain Makower fabric to try out some blocks. There are more details about these on the webpage about choosing fabrics for Sampler Quilts. In my experiments with these, I have decided to do half on a light background (using the pink family fabrics):

The other half, I have done on a dark background (using the blue family fabrics), to show you the alternative possibilities.

Note that some blocks have a more continuous background than others – the three above all have a darker blue/jade or black fabric on every outside edge, so I could put a light or medium sashing against them all, which gives me a wide choice. I would need to be more careful choosing a sashing for the pink set above though – although the Windmill block has the cream fabric everywhere in the background, both the others have a mixture of light and dark fabrics on the outside edges, despite the fact that the Light is still obviously the “background”.

I have decided to choose a selection of circular style blocks – mostly Stars, and am now starting to release the free patterns for these blocks in a series of blogs called Skilful Skyful.

Each blogpost will cover a different technique, so that you can gradually build up your skills from easier to more complex techniques.

Each instalment will contain one pattern which is more basic, and suitable for beginners; and one design which uses the same technique, but is a little more challenging. So, you could just try the blocks at your own skill level, or start with the basic one, and then practice the technique again on the more difficult block.

In my opinion, the other factor to consider is whether you want a consistent “style” to the blocks.

You may have thought about including blocks using different techniques that you have learnt in a course, practised in workshops, or from magazines. But will they produce a harmonised mix?

Most American block designs have a similar “feel” to them, but English style mosaic piecing (sometimes called English Paper Piecing) has a different look, and often doesn’t fit so well into a square block geometry

None of these designs fill the entire square, as the edges are not at 90 degrees. They would need stitching down onto a background fabric. Although it is perfectly possible to do this, personally I don’t like the visual style, mixed in with American blocks.

Do you want to include appliqué blocks as well as patchwork? Why might they look different? Often, the difference is that they include far more curved elements than the patchwork. They can work well if you have several appliqué blocks, and make sure that the final arrangement places them in a balanced way.

Again, consider the background colour: these three on Light backgrounds shown below are stylised traditional designs, which all have the same “circular” format as the patchwork blocks, so could be combined with them.

Here are three more suitable ones on dark backgrounds:

However, appliqué can include more pictorial elements – more modern blocks like these would be best making up the whole of a Sampler Quilt, rather than being combined with traditional block patchwork.

Consistent size  and geometry of blocks

Classic Sampler Quilts have blocks which are all the same size. More modern layouts sometimes combine different sizes, often without sashing – but to cover the entire area with no awkward gaps, you will need to make the smaller blocks a simple fraction of the larger ones (e.g. 15″ and 5″, or 12″ and 6″, but not 15″ with 6″).

I’m going to make all my blocks 12″ square, a popular and useful size.

This means that I can use designs based on two different geometries.

Some are based on a “nine-patch” where the underlying geometry is 3 columns and 3 rows which have units of 4″ square. Can you pick these out on the Braced Star, shown to the right?

These blocks have four rows and four columns, with each small unit measuring 3″ square. See “Margaret’s Choice” shown to the left

Note that I can’t easily make “five-patch” or “seven-patch” designs to finish 12″ square,  as the maths doesn’t easily allow 12″ to divide into 5 or 7.

So, I won’t be able to include this Roundabout block or this more advanced Solitaire block in my set of 12″ blocks – but if you would like to try and make it in a 15″ version, they are available as a free download from my online Shop.

I have written another webpage which discusses how you can choose fabrics, which can be found at Planning a Sampler Quilt Part 1