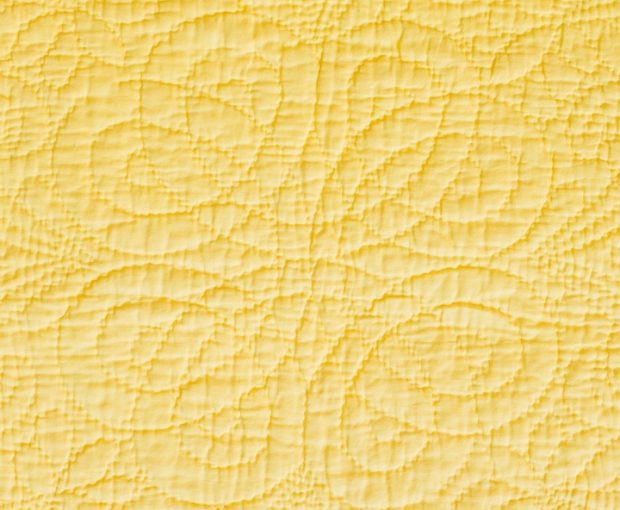 This quilt is typical of many made in the North East of England in the first half of the twentieth century.

It is made of cotton sateen fabric, which is a bright clear yellow on one side, and a paler yellow on the other (note that the colour on the close-ups is closer to the original than the photo of the whole quilt, where the colour has been adjusted a little to show the design more clearly)

A large central area is surrounded by two borders, but unlike Welsh quilts, there are no straight dividing lines, allowing the various different designs to flow into each other.

The central design is a True Lover’s Knot, which has no beginning and no end. Note that in this example, the quilter has not attempted to make the “rope” go under and over itself as is often found in Celtic designs.

Four pairs of curling ostrich feathers form a frame around the fleur-de-lys, and are combined with flowers and small leaves to complete the circular central design.

Upright Fans form the inner border; four along each short side, and five along the longer ones.

A small cable is chosen for the outer border, with a tiny rose avoiding the need to turn the corner.

The corner, as is common for North Country quilts, has a complex motif assembly. A flower with pointed petals is flanked by two feather sprays, and a spray motif comes out of the corner towards the centre of the quilt.