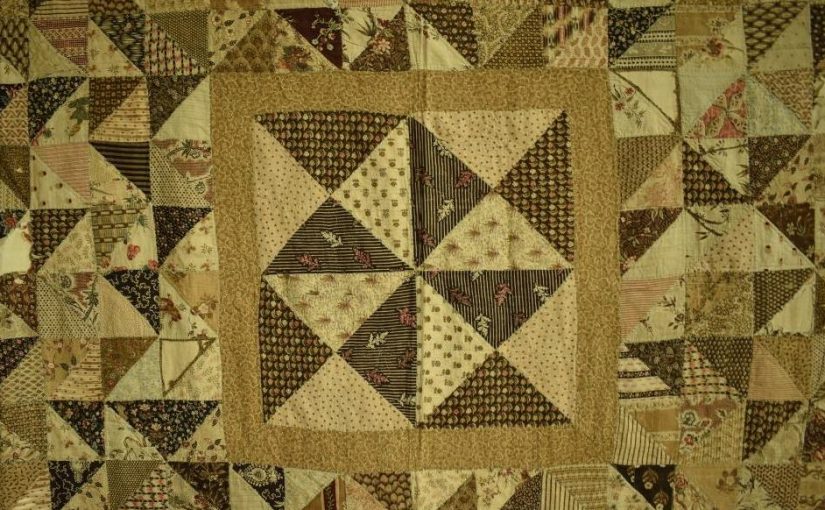 The frame layout of this coverlet is typical of early patchwork quilts made in the UK – the block layout more familiar nowadays to many quilters is a style which developed in America, and did not start to influence British quilts until the late nineteenth century.

A relatively small central focus – here a pieced section made from four quarter square triangle units – is surrounded by borders. This coverlet has a very wide border made up of half square triangle units which fills most of the rest of the quilt, and then an outer border made up of carefully placed sections cut from fabrics with multiple stripe designs.

The development of the textile industry, and improvements in printing techniques meant that a wide variety of printed cottons became available. Patchwork was a popular style of needlework among ladies with enough time and money to invest in what were often expensive materials, involving many stages in their production.

There are too many interesting fabrics to show them all here, so I have just picked out a few, which are representative of the sophisticated printing techniques used:

Chintz fabrics, originally imported from India, were manufactured in the UK as British printers developed the skills. A black outline was block-printed, and then separately printed mordants combined with madder when dip-dyed to give reds. Yellow (various plant dyes such as weld) and blue (from indigo) were then added, usually by “pencilling” (painting on the dye or mordant by hand).

The yellow dyes were often not “fast” and often faded away from these chintz fabrics, leaving rather blue leaves.

Printed designs included imitations of woven techniques such as ikats.

The fabric on the top right triangle is a dimity (a white fabric popular for light upholstery woven with a textured pattern) which has been overprinted.

Shading was created by the use of thousands of individual pins made of brass wire individually inserted into the printing block.

This quilt is one of my favourites, and I still have a lot to discover about the astonishing range of printed fabrics that it contains. If you would be interested in learning more, a good online resource is Identifying Printed Textiles in Dress 1740 – 1890 by Philip Sykas. Joining the British Quilt Study Group has been very helpful for me, too.

Nowadays, we would describe this as a “Scrap Quilt“. Click on the link to go to one of my Techniques pages, where I show some more examples, and describe how to successfully choose a multitude of fabrics that will work together.

This “quilt” should really be described as a coverlet, as it includes no wadding. However, it does have simple quilting to secure the patchwork top to the linen backing.

The border to the central panel has chevron quilting

Each triangle is surrounded by what we would describe nowadays as “stitch-in-the-ditch” quilting.

Another frame quilt, the Red and White frame quilt with Irish Chain, dating from the early nineteenth century has a much narrower range of less sophisticated fabrics.

Click on the links to see more Frame quilts, or a more general range of Antique Quilts